If you’re a fan of romantic suspense books, then you might want to check out the latest offering by lovely author, Jane Hunt.  I haven’t read this one yet but it’s been added to my reading list.  Such a gorgeous cover!

After a tragic plane crash kills Jennie Taylor’s guardians, she returns to her childhood home—and her first love, Jared Stewart.

At just eighteen years old, Jennie had left the Unicorn Ranch in Texas to seek a life in the outside world. But she wasn’t just running toward independence. Heartbroken and confused, Jennie fled her home after Jared harshly rejected her on the eve of her birthday. Now she must choose between making a new life on the ranch she has grown to love, or returning to her simple but empty life in England.

The choice seems obvious at first, but nothing in life is simple… Jared is forced to share control of his beloved ranch with the woman he wants but can’t have. When Jennie receives an anonymous note, she goes to Jared for support. But what she finds is more than she was prepared for, driving the two further apart than ever. When an old friend is murdered and suspicious accidents escalate, endangering Jennie’s safety, Jared becomes her reluctant protector. Jennie knows Jared is hiding something, but does he really want her gone from the ranch? And if so, could he be the one behind the ominous threats? Determined to prove Jared isn’t involved, Jennie turns detective. Can she succeed in her courageous but reckless investigation…or is the truth a dangerous gift she won’t survive?

And for readers interested in the author behind the scenes of The Dangerous Gift, Jane’s here to share a little more about her writing journey:

“The publication of ‘The Dangerous Gift’, my third book, made me look back over my writing journey so far, which I would like to share with you. Most authors asked, ‘When did you first start writing? Answer, something like, ‘As soon as I could hold a pen’, but for me the story is a little different. I loved reading from any early age but only started creating stories when I was about seventeen. At nineteen, I took a writing course and wrote my first stories. None of these were ever published because ‘Life Happens’, as they say.

I went to University and then worked in health service management, until I had my children. During the nineties before the ‘eBook’ revolution, when I was lucky enough to stay home with my kids, I wrote two books. Both rejected by a well known publisher. Disillusioned, I gave up writing for a while to go back to my health service career. Busy years followed; bringing up my children, enjoying a busy career and caring for my mother, until her death in 2004. An Illness ended my career abruptly but rather than look at this as a setback I viewed it as an opportunity and I started writing again.

By 2012, I was a full time writer. ‘The Dragon Legacy’ was published a year later with the sequel in 2014. ‘The Dangerous Gift’ my first romantic suspense was published last week. Set in Texas, it has a sexy cowboy hero and an amateur detective heroine. I love reading mystery thrillers, with a strong romance thread running through them. ‘The Dangerous Gift ‘ is my interpretation of these. I am currently finishing my first historical novel, working title ‘Past Shadows’ which I started a couple of years ago. I am also looking forward to writing another romantic suspense story.” 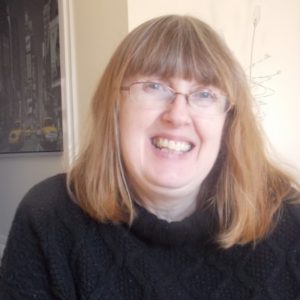 ‘Writing has touched my life in every decade. At fifty, I took a risk and made writing my career, fulfilling a lifetime ambition.’ I enjoy writing blogs, book reviews and especially stories. Vivid imagery, atmospheric settings, strong females and sensual males are essential for my stories. Everyday life and ordinary people inspire me. How would someone react, if faced with something extraordinary? A thread of romance runs through my all my books, whether they be suspense, fantasy or historical. I want to let my readers escape their lives for a while, experience new places, new people and most importantly, new emotional lows and highs My favorite parts of the writing process are; finding a person, event or place that makes me want to write a story about it and the writing itself; when your fingers cannot type fast enough, to transcribe your thoughts. Family is very important to me. My two children are my greatest achievement to date. I am an animal welfare supporter and regularly use social media to promote animal welfare issues.