My Top 5 Tips for Writing a Series

I’ve frequently been asked what it’s like to write a series and if I have any tips on how to approach one. Writing The Keepers series was my first attempt but two years later, I’ve written three books and I’m finalising the fourth book, The Keepers: Ethan.

The lovely Jo Huges from  Comet Babe’s Books recently hosted me on her blog for #HIFortnight, a two week celebration of romance books and the fab authors at HarperImpulse who write them.  I wrote a post for Jo’s blog to share what I’ve discovered whilst writing a series and I’m reblogging it here in case you missed it.  So here it goes, my top tips for writing a series:

Keep a notebook specifically dedicated to the series that lists all the characters, their personalities, traits, clothing choices and marks. When writing about my three gorgeous Keepers, I often had to check whose tattoo was placed where, which cheek had the dimple, which arm had the scar etc. It’s also important to keep track of all the mythology, rules, spells, general plot outline – this will differ between each series. And keep it updated! This helped tremendously. Many of my readers read my books in a few days but for me, the series was written over a few months – years! It’s easy to forget the smaller details!

2. Be prepared for a lot of characters

The Keepers are three warrior brothers (plus their sister Sarah) who protect a powerful modern day witch. Starting the series, I had five characters with varied personalities, speech patterns, habits etc. Even though each book focuses on one hero (a brother) and heroine at a time, there is still a lot of interaction between all the characters. At times, when everyone’s in one room together, it’s crazy fun – and challenging to keep up with everyone. I had to spend a lot of time thinking about my characters, getting to know each one and making them all unique in their own way.

My Keepers live in a small fictional town called Rapid Falls. They own a wine estate farming in Ice Wine. In the first book, The Keepers: Archer, most of the story took place in Rapid Falls. Many of my scenes occurred in their mansion, often the kitchen which is the local gathering place for the family. (Don’t you just love the warmth of a kitchen?) When writing The Keepers: Declan, I wanted fresh settings but also still wanted to revisit the familiar ones from the previous book (like the kitchen back home.) So I brought in New Orleans and a Canadian mountain range which offered lots of exciting opportunities for magic and mayhem. When writing the scenes in Rapid Falls, I did revisit the kitchen but also introduced a few new rooms at the Bennett mansion that I hadn’t mentioned before to give the reader a fresh glimpse of the estate. Playing with new settings was fun, fresh and helped me to avoid repetition. (And my Keepers got themselves a gorgeous indoor pool area too! 🙂

4. Remember where you’ve been, know where you’re headed

This statement sounds so obvious but in truth, it took me a long time to write the four books so it’s so easy to forget things that needed to be addressed/avoided/considered in later books. Initially I planned a plot outline for the entire series and knew how the final book would end but there were often times I had to sit back, breathe and remind myself what’s been done and where I’m going with the series. To keep my focus, I use Pinterest, pin boards, photographs, notebooks, white boards, post it notes – basically anything visual that will keep me on track. I also tend to have a quick read through the previous books to make sure I’ve covered everything. 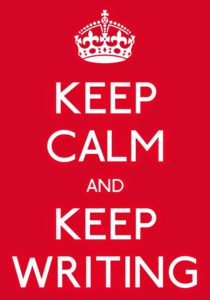 Writing a series is HARD WORK. My Keepers are all full length novels (besides The Keepers: Sienna which is shorter) so each book is fairly long. The first book was easy. The second book a little harder as I had to incorporate the back story of the first book. The third book – even harder as I had to keep moving forward with a fresh story but still incorporate the back story of two books without bogging down the plot. The fourth book, The Keepers: Ethan, was even more challenging. I had to consider the back story of THREE books (think plot points, magic, spells, folklore, mythology, characters, and villains!) and tie up all the loose ends introduced in the first books. I had several villains, six main characters, and a few secondary characters – and they all needed their own space in the book. (A book can only be so long, you know?) So yes, there were times when writing my series became a tad overwhelming and my brain felt a little short of fried but that was usually a sign that I needed to step away and play with my kids, have a glass of wine, and hug my husband. A short break often put things back into perspective and revved me up for the next round. Keep calm and keep writing!

So, having said all that, will I write another series? YES! (A little differently, but definitely.) I’ve discovered that I am a series writer and despite the challenges, I love everything about it. I can’t wait to start my next one!

Thanks for reading,
Rae Rivers